skip to main | skip to sidebar

At this point, it would be a cliche to say that Israel has a PR problem. It is clear that in many sectors, Israel has lost the battle for hearts and minds. To many, Israel is an illegitimate state built on an original sin and its every action and policy only serves to confirm and reinforce Israel's inherent evil. While some have taken up the challenge of defending Israel, there seems to be little or no strategic coordination, with no central message being promoted.

It is essential to show Israel beyond the conflict with its neighbours. To this effect, numerous groups such as Hillel try appeal to students by promoting Israel as party central, as a vibrant and sexy place full of beaches, clubs, hot women and good-looking men. While it is important to show Israel's modern society, this above approach leaves much to be desired. Some might argue that in might even have the opposite effect, showing Israel to be a high-tech superpower callously dancing in its "bubble" while the poor, oppressed Palestinians are suffering beneath its military boot.

So why does Israel have a marketing problem? I would suggest that it has to do with a Jewish ambivalence about making a strong claim. The "Israel = sex" approach fails because it tries to promote Israel as an alternative to Los Angeles, Brazil or Amsterdam. What is results in is a rather cheapened image that fails to convey Israel's true beauty.

Israel is one of the most unique places on earth. The world's only Jewish state, Israel is an enigma. Fundamentaly, at the core of the current campaign to delegitimize Israel is a burning question asked by Israel-haters, the ignorant public and even many Israelis themselves: "What are Jews doing in the Middle-East?" In order for a true PR victory to be successful, it must address this issue head-on while highlighting Israel's amazing achievements and advancements.

The modern State of Israel has a story unparalleled in the history of humankind. It is a story of love and longing, oppression and faith, courage and heroism. It is the story of a people exiled from its homeland for two millennia while never giving up its dream of returning to its borders. It is the story of an ancient people building a modern state. There is no precedent in the annals of humanity for the survival of a people outside of its land for 2,000 years, and for its subsequent rise from the ashes to come home.

Let the world know that Israel rivals Egypt, Babylonia, Rome, Persia, China and India in terms of antiquity and it has outlasted all of its ancient neighbors. Let the world know that before the Greeks ever produced a lofty deep thought that the Jewish people were already ruled by a Jewish king in the Land of Israel. Let the world know that when Rome was still just a collection of mud huts along the Tiber River, Jewish prophets living in Jerusalem, Judea, Samaria and Galilee were preaching the morals and ethics that form the basis of modern Western civilization.

Let the world know how the Jewish warriors fought like lions against the legions of Rome in defense of their homeland. Let them know that even when the Romans declared that "Judea is vanquished" and built a monumental arch to celebrate their crushing victory other the Jews, these same lowly Jews continued to have faith in their eventual return to Israel. Let them know that for twenty centuries, Jews turned three times a day towards Jerusalem and prayed: "May our eyes behold Your return to Zion in mercy", that every single Passover seder and Yom Kippur fast ends with the fervent hope of "Next year in Jerusalem", that every groom at his wedding pledges that if he should forget Jerusalem, he should forget his right hand.

Let the world know about the brave pioneers to dreamt of a Jewish state in a barren and empty land, who were mocked for their vision. Let them know about the chalutzim who answered the call to ascend to the Land of Israel, who dried out swamps, fought malaria, disease and hostile enemies, and ultimately made the desert bloom. Let the world know that the most fertile, green, blossoming parts of Israel today were nothing but desolate wasteland a mere century ago and would still be but for these courageous Jews.

Let them know of a state that arose out of the ashes of the destruction of European Jewry, a state that took in hundreds of thousands of Jewish refugees from Arab land, a state that saw the ingathering of entire Jewish communities as disparate and far-flung as Yemen, Poland, Russia, Afghanistan, Morroco and Ethiopia. Let them know that the prophetic prediction of the Ingathering of the Exile on eagles' wings is unfolding before our very eyes as Jews continue to answer the call of Zion.

Let them know the story of the few versus the many, of how a ragtag nation of survivors, with G-d's help, overcame the combined armies of 6 nations, of how Israel has paid for every single inch of territory with Jewish blood, sweat and tears. Let them know how despite Israel never having known a single day of peace, it has produced a tolerant, advanced and modern society, how despite the daily attacks on its citizens and survival, it is a world leader in technology, medicine and science.

Let them know the story of Israel. Wow! What passion! What drama! This is the story that the world is waiting to hear.
Posted by Avi at 7:14 PM 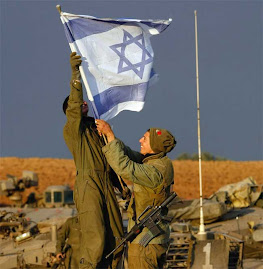 It is the right of the Jewish people over generations, a right that under no conditions, can be cancelled. Even if Jews during a specific period proclaim they are relinquishing that right, they have neither the power nor the authority to deny it to future generations. No concession of this type is binding or obligates the Jewish People. Our right to the country - the entire country - exists as an eternal right and we shall not yield this historic right until its full and complete Redemption is realized." --- Ben Gurion

Avi
"Listen world, I am a Jew, I am a Zionist, and I pledge myself to Return to the bosom of Judaism; to its teachings and commandments, to the Yoke of Heaven to which I gladly bow." --- Rabbi Meir Kahane HY"D